“Working with Funding the Next Generation Project makes me confident that we will prevail in moving the needle for children and youth in our local communities.”
– Claudia Jasin, City of Sacramento

We are organizing a cohort of coalitions in interested communities that have both the motivation and the foundational elements of community commitment and leadership in place to fight for resources for children and youth. The communities represent a wide range of populations in terms of culture, ethnicity, and socio-economic status. The cohort functions as a learning community – sharing successes, ideas and challenges. The participating communities are being supported in budget research, strategic planning, community organizing, coalition building, messaging, polling, technology, and fundraising. 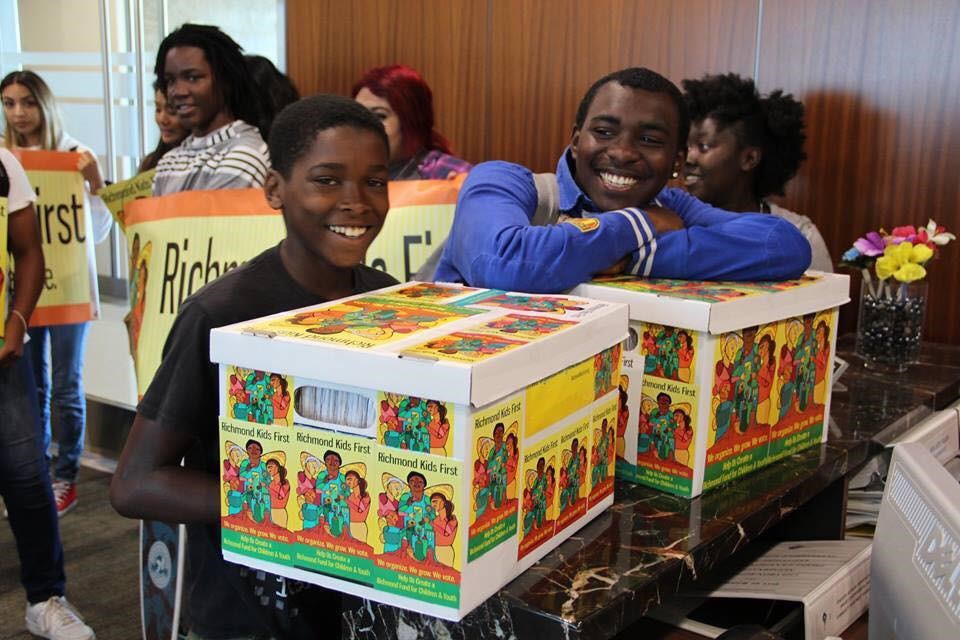 For years, folks at the RYSE Center in Richmond dreamed about having a Youth Fund, and in 2014, they got serious.  First they organized the Invest in Youth Coalition (IYC), with their allies and colleagues in the community.  After months of meetings and building consensus, the IYC agreed that its first collective goal would be to work to pass a Youth Fund, modeled after the Funds in San Francisco and Oakland.  They then spent several months developing a measure that was consistent with their philosophy about young people.  It was a group process, and young people had a full voice.  The lawyer who drafted the final measure on behalf of Richmond Kids First, the name of the campaign, said it was the most extensive measure she had ever seen.

The goals in the measure were:

A petition drive ensured to get the measure on the ballot and young people led the way collecting signatures.  It was a heroic organizing effort.  In the end, despite vigorous advocacy efforts, the City Council used its discretion to keep the measure off the 2016 ballot.  However, the signatures were validated and, the measure passed in June 2018 by 76% of the vote.  However, reaching a successful measure was not easy, and it took 2 other measures to make it real – a second measure in June 2018 requiring a new revenue stream for the Fund, and the passage of a Real Estate Transfer Tax in November 2018 to raise the money to pay for the Fund.  As a result of all the negotiations around the 3 measures, in the end they all had widespread support from city officials, labor and youth advocates. 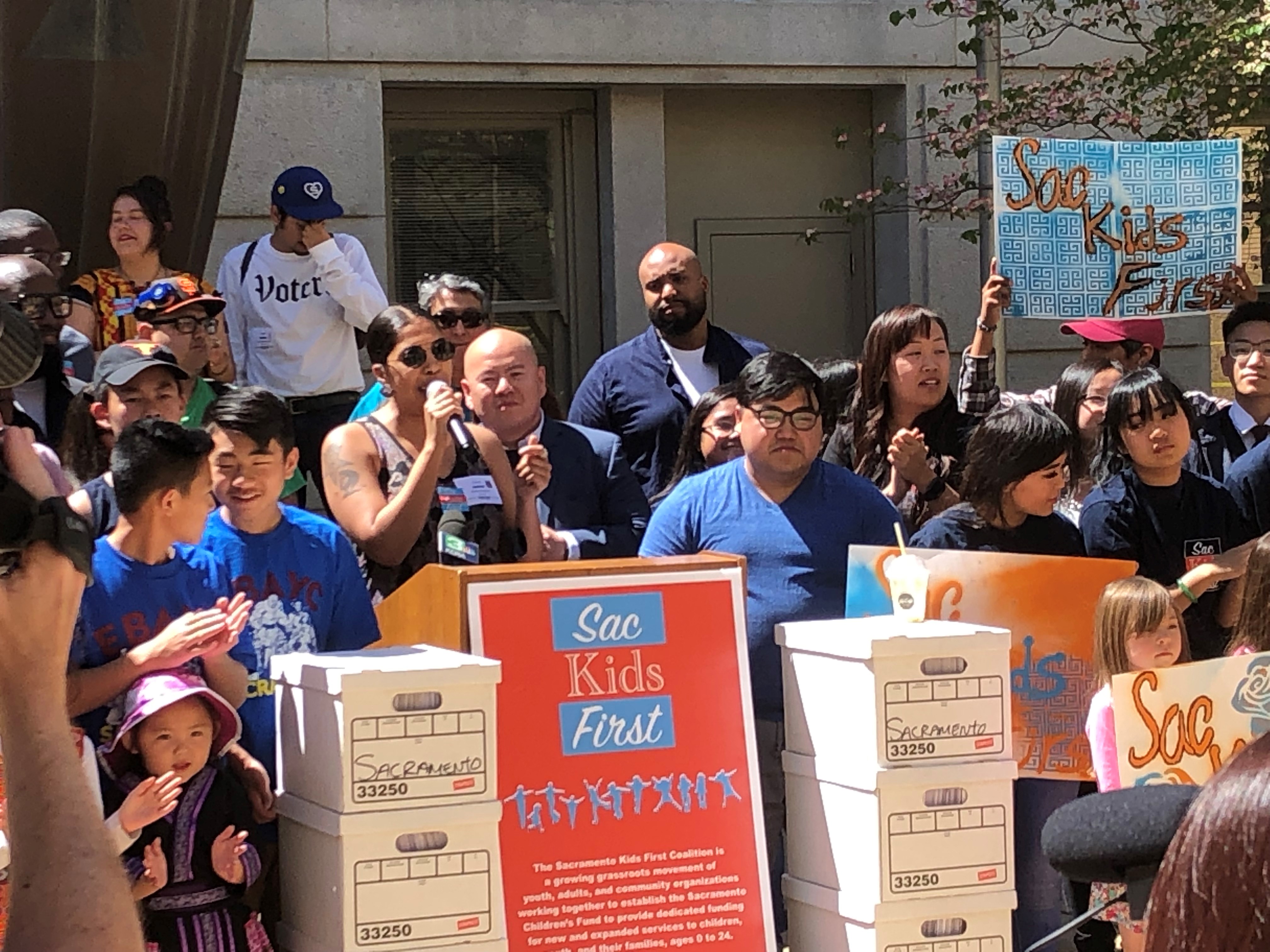 Sac Kids First coalition submitting 39,017 signatures for a Children’s Fund to the Registrar of Voters in Sacramento

Advocates for kids in Sacramento are in their second round of placing a measure on the ballot.  The first was led by City Council member Jay Schenirer.  The 2016 measure called for the marijuana tax proceeds to be placed in a dedicated fund for youth services.  Despite opposition by the city’s main newspaper, the measure gleaned 65.8% of the vote, just short of the 2/3 needed to pass.  This demonstrated strong support for youth in the City of Sacramento.

This near-success spurred on a new and diverse grassroots coalition called Sac Kids First, brought together by the East Bay Asian Youth Center, to develop a second measure: a set aside of 2.5% of the city’s General Fund for a Children’s Fund for services to children and youth less than 25 years old.

The goals of the Fund are to:

The Fund is expected to accrue $12 Million a year, and will be overseen by a Sacramento Children’s Fund Planning and Oversight Commission.  The City will be prohibited from using the fund to supplant existing services.  Allowable uses will include mentoring, job training, culturally-based hearing practices, summer and after-school learning, early childhood education and parent support services.

Sac Kids First drafted the measure and collected signatures to place it on the ballot.  The signatures have been certified and the measure will appear on either the March or November ballots in 2020.  The group submitting the signatures for verification is pictured above.  So far, the measure has gleaned significant political support, including support from the City’s Mayor. 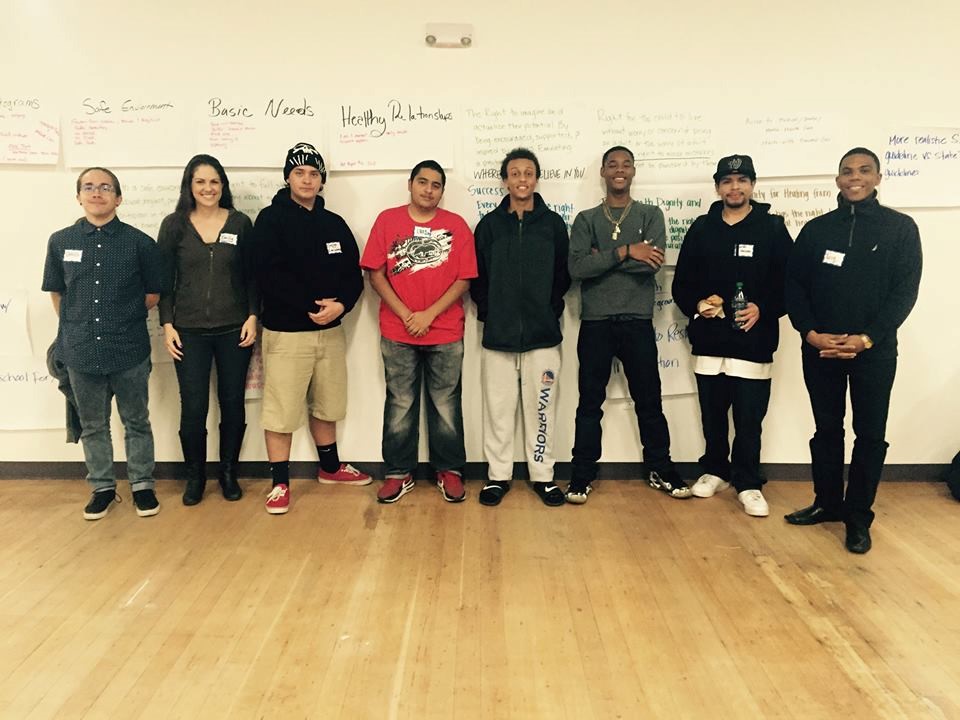 Starting in 2016 with a small group of children’s service providers and an energetic member of the Board of Supervisors, Kathy Miller, a new organization was born: the San Joaquin Children’s Alliance. Within a year, it has succeeded in having the Board of Supervisors adopt a formal Resolution of Commitment to the county’s children, with 150 people in the audience who had been engaged in drafting a Children and Youth Bill of Rights. The Alliance moved on to successfully advocate that a formal task force of the county be established with the purpose of developing strategies and policies for increasing funding for services.

After a year of work, the Task Force presented its report to the Board of Supervisors with 100 folks from all parts of the county in the audience and providing testimony. The major recommendation was that marijuana tax dollars be spent on prevention programs for kids. After powerful advocacy, the Board of Supervisors voted to place a measure on the ballot to tax marijuana and have 50% of the proceeds go to children and youth services. This was an astonishing victory – and set the pace for communities around the state. In November 2018, the measure received 63.5% of the vote. While this would mean passing in most states in the country, in California a 2/3 vote is required. The Alliance is not giving up and is busily strategizing next steps, including supporting the continuation of the county Task Force and the engagement of multiple players in identifying needs of kids and presenting the Board of Supervisors with recommendations and priorities.

Going from a membership base centered in Stockton, the Alliance has spread throughout the County, involving Tracy, Lodi and other communities and rural areas. And, it has expanded from a focus on young children to also having youth members, who are being trained to translate their personal stories into policy and funding demands. The Alliance is also reaching beyond service providers, and is engaging the business community and other civic leaders, as well as the major educational institution in the county, the University of the Pacific.

Two foundations have stepped up to provide support: The Sierra Health Foundation and The California Endowment. Christina Gilbert is the organizer of the group – a mom with 3 kids in the public schools, new to organizing, but an old hand at herding cats and helping folks get efficiently and enthusiastically from A to B. She is a natural, and is bringing people together around kids in San Joaquin County like never before. 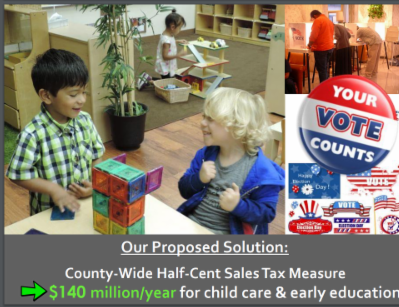 Stakeholders from throughout Alameda County have been talking in many forums over the years about the needs of young children and the need for adequate resources. In 2017 all of the pieces began to fall in place for a 2018 sales tax measure. A lesson learned for the field is that it is sometimes a long build-up to get to a point where a ballot measure is the right course of action.

The elements that came together for Alameda County are:

The totally unique element of the campaign is the role that the East Bay Community Foundation is playing. Community foundations are legally able to give money directly to political issue campaigns. Sadly, it rarely happens, and many foundations and others believe it is not legal. Not only is the East Bay Community Foundation donating to the campaign, but it has established a fund that allows all types of foundations to pool their money and also give money legally. By the end of 2017, the pooled fund was a million dollars – a long way toward the cost of a campaign. Funding the Next Generation is recommending that other community foundations use this as a model. One of the biggest challenges for Children’s Fund campaigns is raising dollars. There is no moneyed interest with the resources to fund a campaign, as there is in school bonds, for instance, where contractors will benefit. For that reason, this strategy being pioneered by the East Bay Community Foundation is particularly important to the children’s movement.

A half-cent sales tax was placed on the ballot in June 2018. It came within an inch of winning, gleaning 66.2% of the vote – just short of the 2/3 needed. BUT the sponsoring organizations and leaders did not give up, and are putting the measure on the ballot again for 2020. This time they are circulating a petition to get signatures in hopes that the voter threshold will be lowered (through a clarification by the California Supreme Court) for measures placed on the ballot by voters. One other difference is that Oakland Children’s Hospital has joined forces with the other groups, and proceeds from the tax will be shared with them to fund prevention services.